Launched to much derision and the collective snort of Canada’s journalist class, the government introduced a new cabinet position, “Minister of Middle-Class Prosperity”. Shockingly the new minister seemed incapable of defining what the middle class actually is, and in an effort to clarify her earlier non-position, went on TV to describe understanding the middle class as different things to different people that needs to be viewed through different lenses.

This answer, such as it was, was uniquely terrible since any applied thought to the question of “middle class prosperity” should yield several interesting ideas that deserve close examination.

For instance, an office focused on middle class prosperity might provide a useful take on inflation in terms of how it affects the middle class. Rather than relying on the aggregate rate that economists talk about at national levels, some clarity might come in about where that inflation is felt, like in housing, child rearing and education. We might also find something useful to say about savings and retirement, both of which are going to be increasingly serious questions into the very near future.

But let’s start with the basics. What is a middle class? First, the middle class is a result of an industrialized society. Though there is evidence of times of improving and deteriorating living conditions for humans in our pre-industrialized past, sustained and persistent improvements in living standards exist as a result of industrialization. This is not just because people got richer (and skills became more specialized) but because the cost of things dropped.

This really picked up steam after the Second World War when Western nations went toe to toe with Soviet command economies and showed, despite all their inequality, that more prosperity for more people came about as a result greater innovation in production in the pursuit of reducing prices. Yes, many people had good jobs, but luxury items like refrigerators, dishwashers, and microwaves all became standard kitchen appliances, as did (in time) TVs, cell phones and computers because prices for those items have been in free fall since the 1950s. 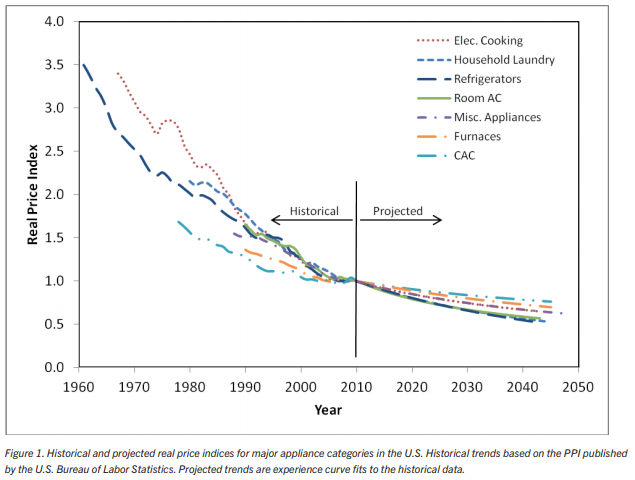 If we are looking for a definition of the middle class we could do worse than something along these lines: “The middle class represents a working sector of our society that is sufficiently monetarily rewarded to save for future financial stability, retains ample discretionary income in the present, and can reasonably aspire to help their future generations.” Threats to the middle class, both to people trying to enter it and to those trying to maintain their status within it, come from the erosion of the cost effectiveness of certain services. Housing, education and long retirements threaten this class of people and some of their ills are obscured by how we understand and talk about the economy.

Consider for instance why we talk so much about taxes. Taxes represent one of the few and very clear levers that a government can pull to change personal finances. They can take less money, or they can take more. As of this week the Liberal government has promised another “middle class tax cut” that should leave an average middle class Canadian $300 richer every year, or $600 for a family. Not bad, and for an individual that works out to being 25% of one month’s rent in Toronto for a single bedroom (average) or three weeks of groceries for the average Canadian family! If you are struggling as a Canadian family despite two good jobs, its hard to imagine that this will make or break a retirement or fund a university tuition.

In a survey done by BDO, 2047 Canadians were asked about their personal finances. The results were less than encouraging. 57% were carrying credit card debt and a third couldn’t pay off their short-term credit. 39% said they had no savings for retirement and 69% said they didn’t have enough savings to get through retirement. These findings match repeated surveys and studies done over the past decade that continue to suggest that Canadians are simply not saving enough and are drowning in debt. 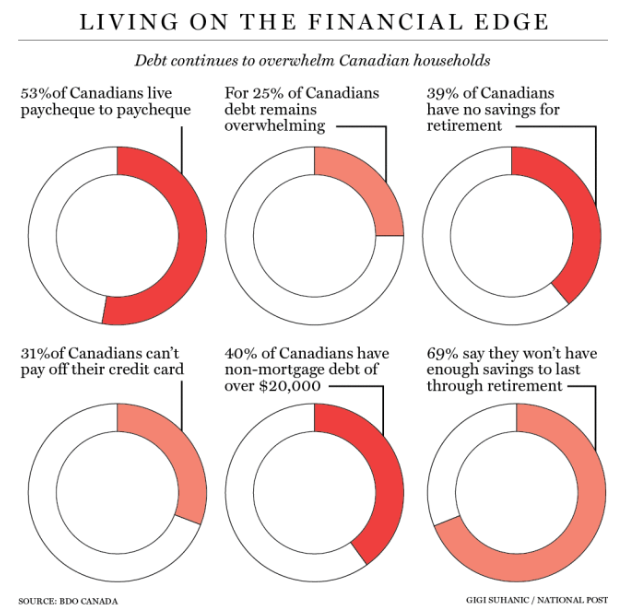 Small tax cuts seem unlikely to fix problems that look like this, and I think its important to note that solutions to these problems are not readily apparent. It should also be noted that being middle class should not mean that you are always financially whole and never struggle. Part of the reason that the middle class has financial issues is because it strives for a life above mere subsistence. Its goals are materially aspirational, and people live their lives according to that aspiration.

A more productive focus should be on helping people enter the middle class. Far too much energy has been dedicated to using houses to boost middle class wealth, both through restricting development to preserve neighbourhoods, and relying on the equity within homes to boost standards of living. This is the wrong place to hoard wealth and it should be replaced with more aggressive home development within cities to boost density, improve services, and reduce the price of homes. Just as importantly the role of higher education should go under a microscope. The costs of University have jumped as more Canadians get degrees and those degrees are worth less in the market. Canadian parents regularly save for children’s education, to the detriment of their retirement savings. The cost of that education is expected to be over $120,000 for a four year degree very soon. Attacking the issue of education head-on would be an enormous help in easing access to middle class security.

Lastly, dealing with debt should be a priority. Lending should have tighter restrictions, especially for younger Canadians in their early 20s when their financial needs are lower, and a state run bank set up to help Canadians get out of debt (the use of which should preclude any other financial lending) would be an enormous asset in terms of allowing Canadians get on going debt help and learn to better manage budgets and connect people to financial help.

Far from having little idea of what constitutes the middle class, we are, if anything, too certain of what a middle-class life looks like and the path to getting there. This is a moment when we should be experimenting with how we create a growing middle class, not calcifying a particular version of life that no longer fits a world that has dramatically changed since the 1950s. A minister for “Middle Class Prosperity” need not be a pointless fluff position making vague pronouncements. Instead it could be a cabinet position that spearheads exciting new ways to improve access to financial security and create paths to long term growth.