Back in August of 2015 McDonald’s started rolling out self serve kiosks into it’s “restaurants”. McDonald’s was quick to point out that the arrival of the touch screen ordering stations would not endanger jobs, and that McDonald’s as you know it will continue on; producing sub-par food that you will regret eating 20 minutes after you’ve finished.

This is patently false (not the food bit, but the employment bit), but that doesn’t mean McDonald’s is lying. They too may think that speeding up ordering won’t impact jobs. But this is what the robot revolution looks like. Not a mass movement to unemployment, but a gradual reduction in the number of jobs available.

Typically when people think about job loss they tend to think of blue collar, formerly middle class factory work that has been outsourced to overseas production. That makes sense because it is one of the most visible forms of improved productivity. But people didn’t move factories to China because they had the most advanced robotics. They moved to China because they (initially) had the cheapest labour. The productivity increase was not one of improved output through advanced manufacturing, but a much older standard of fundamentally cheap human labour.

Factories that have stayed in North America and Europe have largely been the beneficiary of more robotic improvements. But these robots, despite improving consistency, wiped out thousands of jobs. In towns like Flint Michigan, where GM once employed 80,000 people in 1980, they employed fewer than 8000 by 2010. But the scars left by yanking thousands of jobs from a community are hard to shake and they may have sculpted our modern thoughts on what the robot revolution will look like. But it is wrong.

If you want to see what the revolution will actually look like, look no further than the airline industry. Around the same time that General Motors was starting to outsource suppliers or introduce new robotics to the factory floor a subtle shift in technology effectively began to eliminate 1/3 of the jobs from airlines. Because starting in the 1980s airplanes no longer needed a flight engineer.

People don’t often think of a flight engineer, but as once the third person in a cockpit on most commercial jets his job was made obsolete by better computers. Today, out of fleets and fleets of aircrafts there are no flight engineers, but nobody is launching into long winded speeches in congress about it, no protests have been scheduled and Michael Moore has yet to make a movie about their job loss. The reason for this it is obvious, flight engineers were phased out as new technology was brought in, not let go on mass. Over time there were simply fewer jobs until there were none. Students didn’t study to become them because they knew the job was unlikely to exist, and pilots, while the loss of the flight engineer might have been initially unnerving, became attuned to more computers handling stuff in the cockpit. While new pilots didn’t miss what had never been there.

How many flight engineers do we not have? That’s a hard number to come up with, but assuming that an FE was necessary person in all airplanes means that American Airlines employs roughly 7000 fewer people than it would have needed to otherwise. If you are looking at the number of flights per day globally, including all the cargo and travel flights, that’s 100,000 flights. Assuming that a crew only does one flight a day (shut-up, I know that’s not accurate) that’s 100,000 fewer people who don’t hold a job because it doesn’t exist.

In the retail space then, we won’t see people laid-off, so much as we will simply see fewer people hired. As minimum wages continue to creep up in a vain effort to try and improve living standards (and yes it is in vain and I don’t have time to explain why in this article) the value in adding a robot that can fold t-shirts becomes far more appealing. It won’t mean firing every person who works in the GAP, but it will likely mean that each GAP store employs fewer people over the long term.

That’s what the robot revolution looks like. A gradual, but persistent reduction in the needed number of people to fulfill a set job. It’s why when Bernie Sanders or Donald Trump talk about unfair trade practices they really can’t undo what has already been done. Even as “good paying factory jobs” return to the United States, fewer and fewer of them reach the shore. Tesla’s Gigafactory 1, the largest building by area on the planet, will only employ 6500 people. By comparison, the Packard Factory in Detroit (the world’s largest abandoned factory) employed 40,000 people at it’s peak. The robot revolution promises to do this to every job, over time as more and more menial aspects of work can be reliably handed over to more complex bots.

So when McDonald’s says that it’s new self-serving terminals won’t threaten jobs, they may mean it but we should know that they are wrong. McDonald’s pioneered standardization in the food industry. They made people into robots long before robots were common. They should know above all, that new cheaper and versatile robotics will in the long term reduce their number of employees, a reality that will speed up as minimum wages continue to rise. This week a curious thing happened. A bank said that Canadians were hoarding too much cash.

Being chastised for having too much money on the sidelines and not invested is one of those things that raises suspicions about whether the financial talking heads really do have our best interests at heart. After all, hasn’t this been the worst beginning to a market in memory? Aren’t there countless problems across multiple markets right now? Are we not worried about the global economy? Have we not just ended a dismal 2015?

In fairness to CIBC and it’s chief economist, it is understandable why they are concerned about the reported $75 billion sitting on the sidelines. Cash doesn’t grown and historically market timing works out badly for most practicing it. People sell when the market is down and neglect to get back in as it goes up, crystallizing losses and missing out on the gains. Smart investing means riding through the markets, rebalancing and being patient. That’s the Warren Buffet way.

Except people aren’t Warren Buffet. RRSPs and TFSAs and other investment accounts are not here to fulfill the larger ambitions of Berkshire Hathaway. They are here to facilitate people’s retirement, a date the looms much larger for more people than ever before. Just consider that if you were 37 in 1990, you were 48 when the market had its first big drop in the early 2000s. You were 55 in 2008, and today you’d be 63. You’re tolerance for risk has decreased significantly in that time as you hurdle towards the date that you will have earned the last dollar you’ll ever make. Under those circumstances taking money to the sidelines may be as much an act of self preservation as it is investment heresy.

I could end this article here, but what is so interesting about the $75 billion number is who is actually hoarding that money and what it may actually be telling us about Canadian finances, because it’s not what you think. 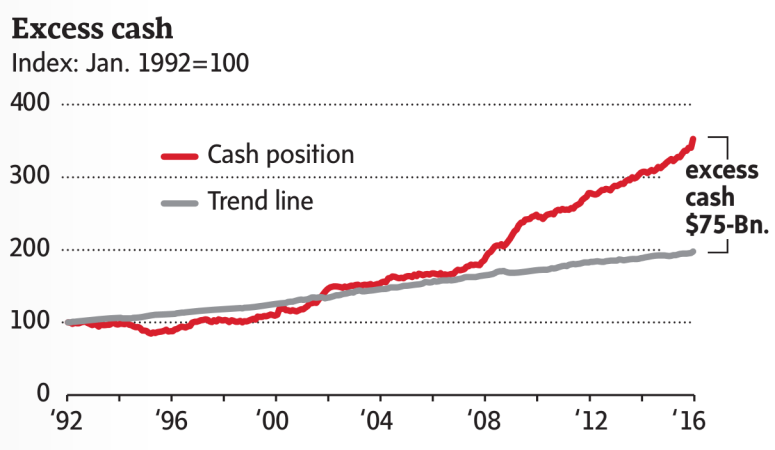 Above is the cash position compared with the historic trend line dating back to 1992. In keeping with both the aging population and the ongoing volatility in the markets growth in the cash positions is understandable, if not always desirable. But look what happens when we look at who is hoarding cash.

Bizarrely it is people under the age of 35 who have the largest percentage of wealth in cash, close to 35% of their available money. Now, if you are over the age of 45 the average cash position is 15% (roughly) which would account for the vast bulk of the derided $75 billion. But even if the under 35 set have less money, why are they holding onto so much of it?

The answer I suspect is both disheartening and concerning, a blend of uncertain finances, savings for down payments on property and the result of bad financial advice. The first two are well documented, both the challenges of making ends meet and the unfavourable housing market towards first time buyers. But the last issue should make us all perk up our heads, for it represents a failure of the financial community to help young investors get good advice.

How does the millennial generation do things? On their phones mostly. Cue the eye roll from anyone under 30 at this gross simplification, but it holds up. The rise of smart phones as a staple of doing things has provided a veneer of knowledge on numerous issues, while encouraging a culture of DIY so long as there is an app to facilitate it. This shift is so profound that back in 2011 Rogers Media applied to start its own bank (which came to fruition in 2013). Why? Well what else do you do in an age where everyone is looking for the cheapest credit cards and the best loyalty program when you control just over 30% of the wireless market in Canada?  If you can pay for things with your phones, why couldn’t you also manage your retirement with your smart phone too?

Young people also don’t have that much money, which has created an indifference from much of the financial community. Rather than cultivate young investors they have been relegated to the sidelines, encouraged to do business with one of the rotating in-store financial advisors, or have been asked at the counter to make a spur of the moment investment decision. Some may have given tried to use the “robot-advisor”, while some will try and do it themselves and many more will do nothing at all.

Profitability drives much of the indifference from the business community, while societally there hasn’t been much for young people to look forward to in the investing world. Far from the heady days of the 1980s and 1990s, the 2000s have been tumultuous and filled with cynicism. The crash of 2008 may have left many investors shaken but it’s also likely put off a number of young people who see no value in it and assume (if the popularity of Bernie Sanders is proof of anything) that the game is rigged against them.

I’m already of the opinion that much of our society is too geared towards helping out the “senior” demographic, but this isn’t a competition between generations. Instead it’s about making sure that we aren’t just looking to satisfying immediate needs but managing to the needs of the future as well. The lessons for a younger generation if they are ignored by financial professionals will not be the ones we want. The help and hands on guidance that has been a cornerstone of sound management for the past thirty years in Canada is not some natural order set in stone. It is the product of outreach and continued effort to develop good habits in both saving and investing. Ignoring a generation will be at our peril and theirs.

You don’t need lots of money to begin saving to have lots of money. We’re taking on young investors. Give us a call and benefit from our personalized and dedicated approach that has defined us for 22 years!