China, the first hit by the coronavirus and the first to emerge from its enforced hibernation, is the global centre of attention as people watch to see how fast its economy can recover from the from the pandemic chaos unleashed in January. If China is able to bounce back quickly it will be good news for other countries and should raise spirits of investors, businesses, and governments that a global shut down may not lead to the worst of all worlds.

Early economic data is both more and less reassuring than one might expect. The impact of the lockdown in China took a sizeable bite out of the economy. The one year change in the value of exports is -15.9% (down already since the trade war began), industrial production was -13.5%, the fastest contraction in 30 years, while retail sales in China were down -20.5%. 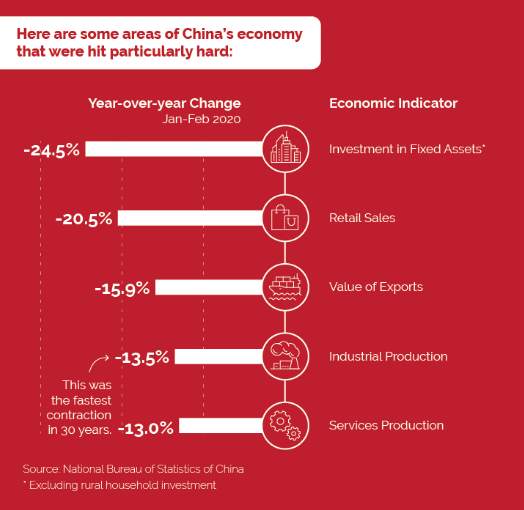 But as things return to normal in the shadow of the pandemic, numbers may also be improving faster than we thought. Reported in the Financial Times on March 20, of the 80% of restaurants that had been closed in February, less than 40% are closed now. That’s good news for small businesses watching from across the Pacific. There is good news in manufacturing as well. The Purchasing Manager’s Index (PMI) has been officially reported at 52.0, which indicates that manufacturing is growing and not contracting. In February the PMI for China was 35.7, a record low for the country. That positive PMI result is helping extend gains today (March 31st) and giving hope to governments and markets that the worst of this pandemic may be shaken off faster than economists have predicted. 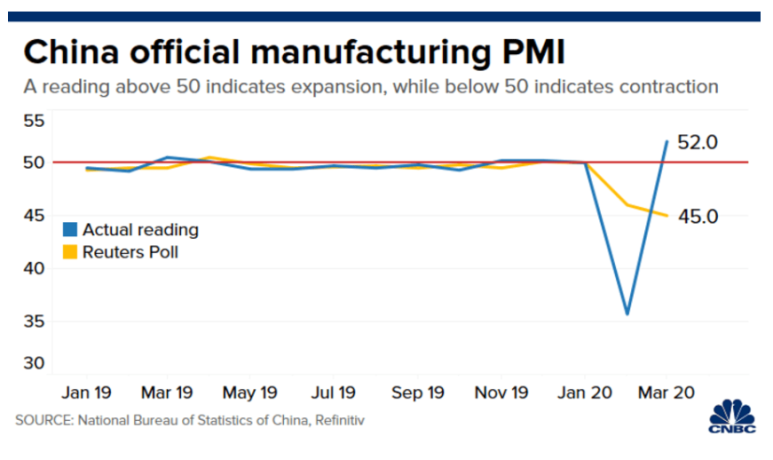 But economic activity is still well below 2019 levels and have a way to recover. In addition, China is one nation, the Western economy is made up of many, and the countries worst hit by the COVID-19 outbreaks have yet to peek and plateau. Italy, Spain and the United States are all fairing poorly, with Italy and Spain perhaps just finally reaching peak of cases now. The United States on the other hand now has more officially recorded cases than any other country, while New York, Catalonia, and Madrid are on track to pass Lombardia as the worst affected cities both in infections and mortalities.

The coronavirus remains the central unknown in this story. If tamed, can it be permanently subdued? If not, can new cases be dealt with on a case by case basis, or will we have to revert to aggressive forms of social distancing? Concerns remain about whether there will be a second wave of infections in Asia, while China has maintained that all new cases are being imported and can be dealt with proactive screening and testing. 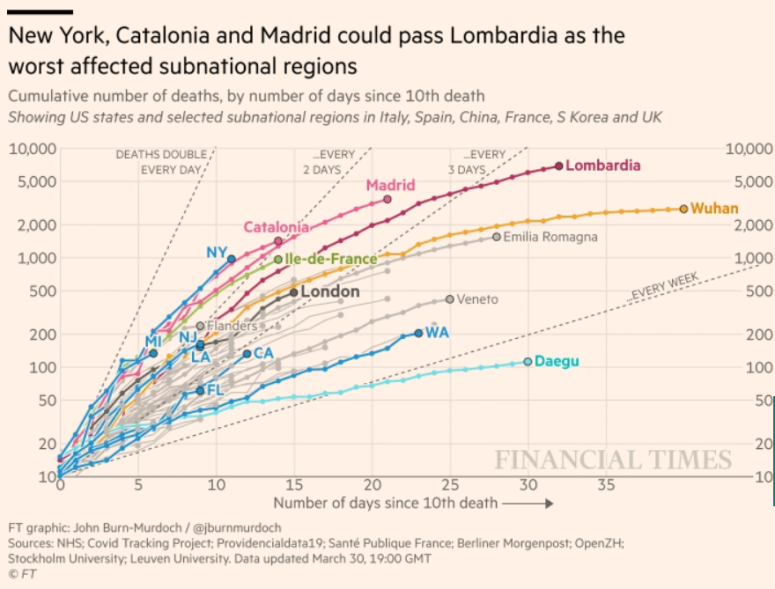 In Europe and North America the best news has been to see production of ventilators, masks and the deployment of field hospitals ramp up to deal with the threat. In the wider Asian region, wide testing and a willingness to follow government dictates and a focus on personal protection through the adoption of wide mask usage has had a direct impact on taming the virus in Taiwan, South Korea and Japan (the exception here might be Japan, which seems to have relaxed prematurely and now is considering shutting down Tokyo). But the best news may still be from China and a sudden and rapid improvement in their economy as restrictions are lifted. If prolonged the early rally than began last week, and has continued yesterday and through overnight trading may become the foundation for a more sustained recovery. If not markets may be thrown back into turmoil.*(Please note, markets seem to be in turmoil again.)

Today, at the end of March, I think the potential for a slower recovery remains possible. Huge stimulus packages have been put in place by governments to help ease the worst of the economic fallout. Governments and their citizens seem to be facing the challenge head on, even if they have been late to the game. America’s enormous manufacturing capacity is being used usefully to deal with the pandemic (better late than never) and early economic news from China is encouraging, but should be treated with caution.