What is the “Dead Cat Bounce”? If you’ve been following the news you’ve probably heard the saying and it has become fairly common among financial professionals to describe the current market in such terms. So what is it?

The phrase has its origins on Wall Street, in that “even a dead cat, dropped from a sufficient height, will bounce.” Charming. But it describes the very real experience of stock markets having a brief but substantial recovery before resuming a fall. The effect is brought on by buyers reentering the market having assumed that a bottom has been reached and encourages others to begin piling in before another sell-off begins. The dead cat bounce is the shadow of hope over an otherwise dire situation that has not yet been fully realized.

As such many have called the current market rally a “dead cat bounce” based on previous experience of other bear markets. The expectation being that this is merely a brief respite before we head into even deeper losses. On March 30th, the website Market Watch asked “Is this a dead-cat bounce or the bottom investors have been waiting for?”. On April 15th Forbes reported “Don’t Be Fooled By The Markets 24% Dead Cat Bounce” and on April 20th the New York Times ran “Can Investors Trust the Stock Market Rally?”.

So what can you do with this new knowledge? Almost nothing.

As that Market Watch article points out, it is hindsight that indicates a “dead-cat” and it is not a predictive asset. Looking at the bear market of the early 2000s there were a number of rallies, some lasting for half a year. Some rallies were indistinguishable from the general volatility of the market and seemed like neither a correction or a rally. Similarly, in 2008 there were a number of rallies before the market finally bottomed and began its long march back (see charts below). Importantly these periods of rebound, while followed by another dip, didn’t hurt investors in the long run. Had you invested in any of the bounces none of the subsequent downturns proved permanent to the long-term investor. 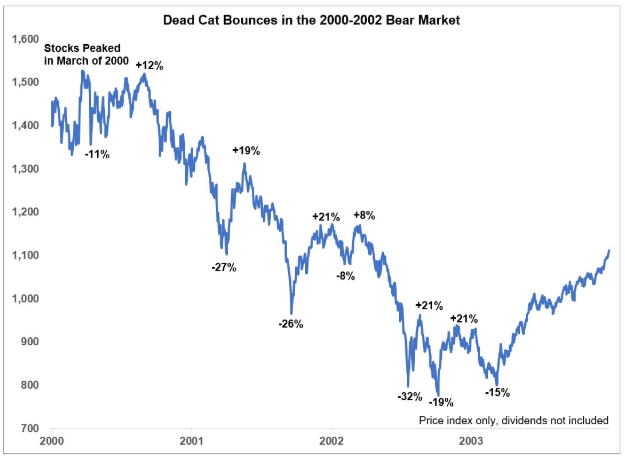 So if the “dead-cat” isn’t a useful predictor, either of time, recovery or depth of the next fall, why is it so ubiquitous? The answer is because it is a non-position, a place holder until something more tangible can be grasped and a way of saying that you don’t know what’s going to happen framed like you do. Just as most predictions at the beginning of the year were for a moderately positive year in market returns, today people are making a claim that markets that go up may also go down, a decidedly underwhelming statement about the nature of market performance. 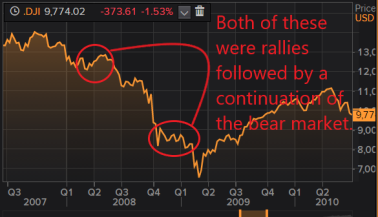 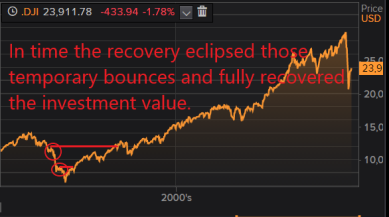 If there is a benefit to the proclamations of a dead cat bounce it is to advice caution to investors, waving them off getting too excited about positive market volatility in periods of extreme danger. Would it be wise to rush into a market showing a tentative recovery, buying every highly risky investment on the chance we’d hit bottom? The answer is clearly no. The warning of the bounce provides a mental check on how fast we should proceed and reminds investors to reconsider worst case scenarios.

Lastly, the dead-cat reflects a bias towards how we understand current conditions. This form of bias isn’t isolated to the financial markets. In the business of predicting weather there is something called a “wet bias” by companies like Accuweather and The Weather Network. If there is a 5% chance of rain, weather forecasters are likely to say its 20%, hedging their prediction. If the chance of rain is 50%, they will likely round up to 60% since 50% is considered less accurate by the public. In other words, the accuracy of the prediction is less valuable than how accurate the prediction feels.

This makes sense. If someone goes on TV today to argue that the recovery will be swift, that the economy will be unscathed, and that we will put this whole ordeal behind us with little societal memory this sounds inaccurate, like a prediction completely detached from reality. Arguing that we are in a “dead cat” style rally is plausible, a sensible take on the current situation that gives the illusion that aspects of this unprecedented situation have precedent and can be known.

We can conclude that the dead-cat bounce is a kind of shorthand that serves as both a warning and an explanation. That doesn’t mean it doesn’t have value, but it is a little short on providing guidance. Instead I advise that people who wish to get back into the market consider the following things.

The dead-cat bounce is part of the lingua franca of the investing world, but it explains very little and doesn’t really provide advice. Whether you want to get back into the markets, or are fearful of doing so, the same due-diligence and questions about comfort of risk still apply. If you can answer those questions you should be able to benefit from the market volatility of bad markets.