The Economist endorses the Walker Report!

Well not really, but they have joined my cause on the problems we face with regards to urbanism and increasing urban density. It’s not everyday that you can say that the economist endorses your position (even if they don’t know it) but in early April my constant nagging about the insane price of housing became a feature for the weekly.

Most Expensive Cities In The World To Live In

If you haven’t been keeping up, I essentially have three big issues with homes in Canada:

Canada’s housing market is therefore a confusing and expensive mess. The risk is high but the need for housing is great and this fuels a great deal of arguments over how great the problem in Canadian housing really is.

The Economist’s take on this matter is an interesting one. It’s not just Canada that has an urban housing problem. Name a major urban centre and you are likely to see the same problem repeated. From Tokyo to London to New York and back to Vancouver urbanites everywhere are dealing with escalating home prices. 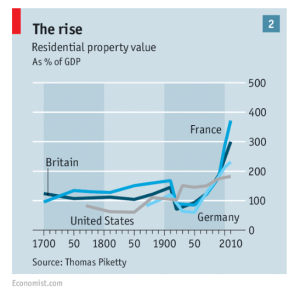 But the problem goes beyond merely being frustrated by increasing realty costs. Housing is a significant aspect to any economy. Building homes makes a lot of jobs, but affordable housing encourages a growing economy. As home prices eat up income there is simply less money to go around. It hurts domestic growth, slows trade and reduces standards of living.

The culprit is not a big bogeyman like the banks (though they are benefiting from this situation) but ourselves. In an effort to improve aesthetic standards of living by restricting changes to our surroundings we have unwittingly hurt our economic standard of living. Almost every city today is burdened with development guidelines and urban bylaws that restrict density and height. These rules run into the hundreds of pages and fill volumes in most city halls around the globe. It’s made cities like Bombay one of the most expensive in the world in a country that is one of the poorest. It restricts taxes and hinders economic and city improvements.

And cities need taxes. We tend to be critical of enormous budgetary outlays for cities, but whether it’s a new subway line in Toronto or a super-sewage pipe in Mexico City, cities depend on the taxes that are generated primarily through dense urbanization. This week the free newspaper Metro published an article showing which wards in the city of Toronto contribute the greatest amount in taxes. Unsurprisingly the “downtown” wards contributed the bulk of city revenue. Wards out in Scarborough had some of the lowest, a difference in the hundreds of millions of dollars for city revenue. Some are quick to point out that the “lie” about spoiled downtowners, but the reality is that density improves economic performance and reduces the burden of taxes while improving its efficiency.

The Economist argues that we waste space in cities, and that comes with a high cost. According to their article the US economy is 13.4% smaller than it could have been in 2009, a total of $2 trillion. Because cities that offer high incomes (like San Francisco) become too expensive people endup working in lower productivity sectors, while making it difficult to live for those that choose to reside in those cities. In the case of Canada this potentially fueling an enormous and dangerous housing bubble while undermining our economic growth. But this is a problem of our own doing. Through our own efforts we have masterminded a situation that threatens our own economic well being. The question that remains is whether we can be clever enough to undo it before it hurts us all.

As for The Economist I will assume they should be calling me anytime to start writing for them regularly….