It is hardly an original thought to lament higher education in this country. It has been a regular pastime of every cultural critic and an open invitation to people of all political stripes. Students complain that they leave school too indebt with little hope for a job. Liberal critics fear that schools have become too focused on making money, Conservatives complain that schools are too PC, professors worry about their jobs, TAs complain about not having enough money and social activists have a host of complaints, ranging from institutionalized racism to accusations of disinterest in campus rape (itself a dispiriting hotbed of controversy). 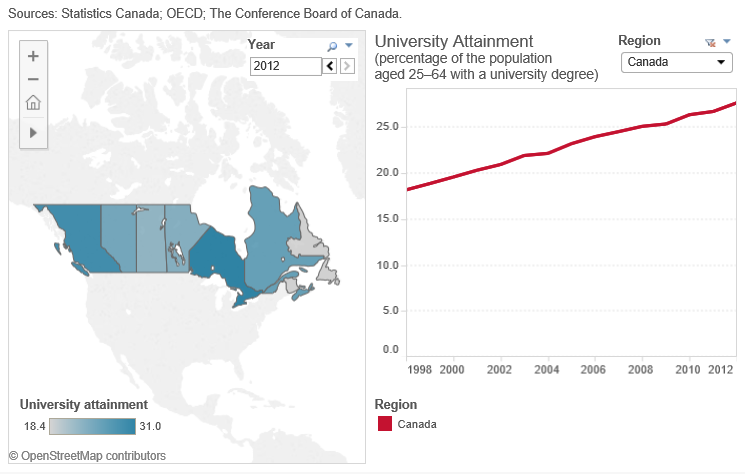 Undoubtedly, the growth of universities and the number of people seeking higher education has been one of the great success stories of our society. Parents begin saving to help their children at a young age to attend a university. Schools are geared largely to getting students into university and in general our society has created an environment that fosters a belief that education is the key to doing whatever you want in life, though statistically whatever you want is more likely to come true if you want to work in a cubicle.

Universities serve many masters, so it should be no surprise that few are happy with it as an institution. But even looking past the general complaints that are directed at post-secondary education, it might be worth at least stopping and asking why we still look to universities as the preferred direction for young Canadians after finishing high school.

Asking why we do something can be fraught with peril. Sometimes the mere examination of a closely held belief can be perceived as aggressive and asking why something is done can expose the uncomfortable reality that sometimes we don’t know why we do what we do. Nevertheless, the price of a university education and the effort and time that go into receiveing a degree should make us stop and pause: Do universities still serve the public interest?

Consider first the cost. Ryerson estimates that the cost of a single year of tuition for someone living on-campus (the ideal university experience) is between $21000 – $25000 per year, including books and other fees. That seems right, and means that a four year degree could easily cost $100,000 – an exorbitantly high cost given that it is roughly the same whether you study Aerospace Engineering or Philosophy.

We should also consider the job prospects. A study from statistics Canada shows that a full one third of graduates with a humanities degree are over qualified for their jobs. And while the evidence is strong that a university degree will improve your earnings, without a vocational degree like engineering, those earnings will be lower than comparable graduates. Worse, having a degree from a university doesn’t dramatically improve your chances of employment over a somebody with a high school education. On top of all that a study done by CIBC showed that there is a negative return on a humanities or fine arts degree. Some have even argued that having no degree is better than a liberal arts degree!

But perhaps the best way to understand the conundrum of universities is by this fact from the CIBC report. Canada has the greatest proportion of adults with a post secondary degree among the OECD, but those degrees cost double the OECD average and the number of university graduates making less than half the national median income is the largest among the group of countries.

Some of this can be explained by what degrees are chosen, and also not chosen. But given that a current estimate for a four year degree for a Canadian born in 2015 will be in excess of $120,000 in 2033 (when they attend university) shouldn’t we be asking whether this is the wisest use of resources? Canadian parents of all stripes are busy trying to balance their need to save for retirement and for their children’s education, and judging by some estimates we’re doing a poor job of both.

I feel confident in saying that one of the reasons we strive for a university education is that it is connected to ideas we have about both social mobility and social status. Universities were once closed off to general population. Only the wealthiest went on to higher education and the best jobs. White collar work in the city afforded the highest pay and was exclusively the result of a university education. And while I encourage all new parents to start a RESP, I believe that more should be done to shape how we perceive the point of our educational system. Given the financial challenges that all Canadians face, funding an education should not become a pyrrhic victory in a life of financial battles. If the purpose of post secondary education is to improve our economic prospects then we are doing a poor job of it.

Hey, Guess What? Trying to Plan Saving For Retirement & Your Children’s Education? We Can Help! Give us a Call or Send Us a Message!